What to eat in Greece

In Athens, our group had a welcome dinner at the hotel we were staying. We started with tasting ouzo. At home, when I tried ouzo at some party, I didn’t care for that strange-tasting liquor. In Athens, they served ouzo with a little bit of water, which turned this drink milky-white. Together with such salty snacks as feta cheese and olives, Greek ouzo suddenly tasted delicious!

Later, when we traveled through Greece, we saw acres and acres of olive groves. After tasting the olives during that welcome dinner, we never looked at the olive trees the same way.

A lot of Greek food reminds us of European and American dishes, but the Greeks use different spices.

During the first breakfast in Athens, we were surprised to see a large bowl of sour cream at the buffet table. Why do they eat sour cream in such quantities, we thought, it is too fattening. Watching our figures, we did not touch the stuff.

Next morning, seeing again how Greeks were consuming the whole bowls of this “sour cream,” we decided to give it a try. Immediately, we understood our mistake: it was not sour cream, it was the greek yogurt!

We eat a lot of greek yogurt at home, but the yogurt in Greece is much thicker and tastes almost like sour cream. Since that day we started our day in Greece eating a large bowl of thick and creamy Greek yogurt.

Tzatziki is a sauce which became popular in our house. Blending several ingredients together makes a tasty and healthy addition to meat or fish. All that you need is Greek yogurt, garlic, olive oil (just a few drops), cucumber, dill. Very healthy and delicious. 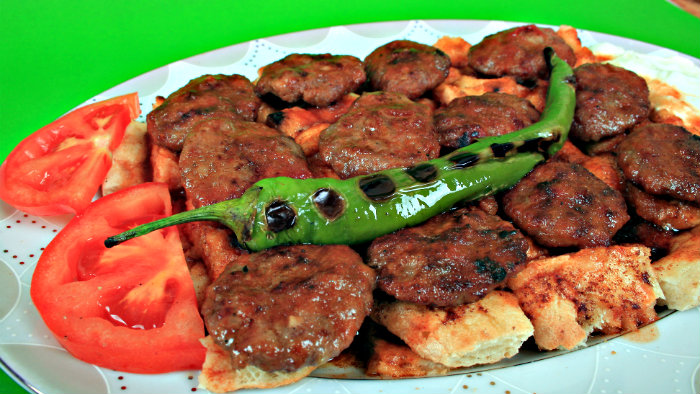 In Greece, even such well-known food as meatballs tastes different from the meatballs you can eat in Russia, Scandinavian countries, Spain, India, etc. The unique Greek flavor comes from olive oil, feta cheese, and a distinct combination of spices. 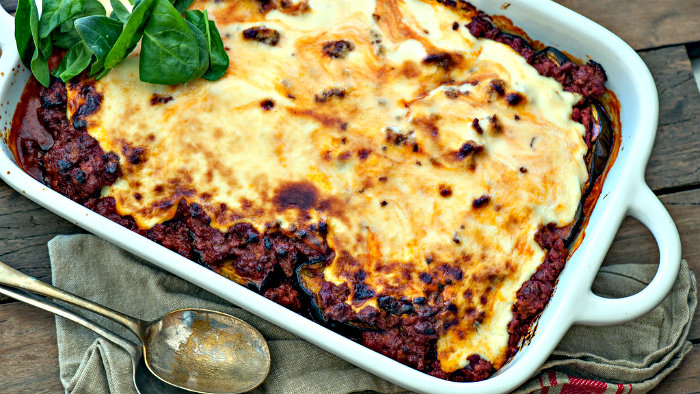 Moussaka is another favorite meat dish. It has layers of lamb or beef cooked in tomato sauce with the addition of eggplant, onion, garlic, spices, cheese, bechamel sauce. Moussaka has a lot of calories because of cheese and sauce, but it is worth it. 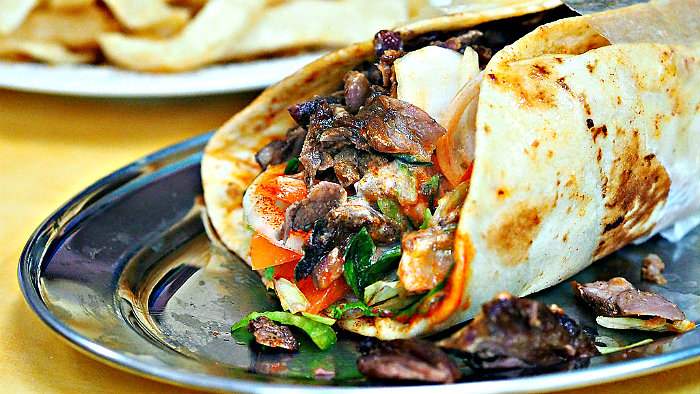 You can find a gyros stand almost anywhere in Greece. The lamb, pork, chicken or beef is roasted on the vertical spit. The server, handling his long extra sharp knife, cuts the paper-thin slices. The meat is placed inside toasted pita bread. The rest of the filling is onions, tomatoes, lettuce, and tzatziki sauce.

Gyros were our go-to meal in Athens. Instead of splurging on a restaurant (in the touristy area near Acropolis the restaurants were too expensive), we preferred to buy gyros from the small specialty shops.

Sitting on the bench, we were eating the incredibly tasty dinner, drinking our favorite Greek wine, and watching people passing by. Occasionally, we had to shoo away the rare beggars who were not too persistent. One firm “no” was always enough. 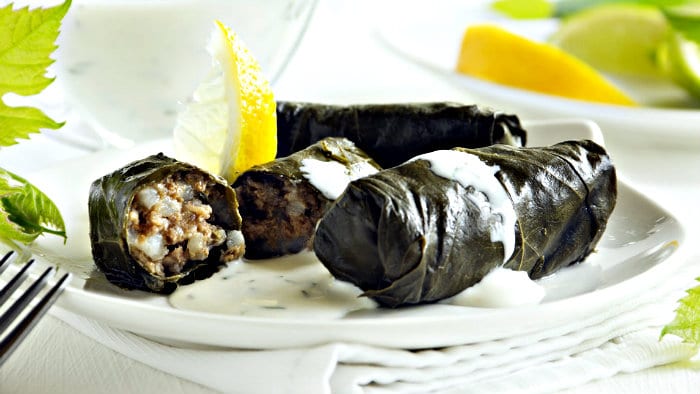 One more meat dish before we will move to the vegetarian fare. Dolmades are grape leaves stuffed with ground beef or lamb and rice. They are great for a quick snack or an appetizer. 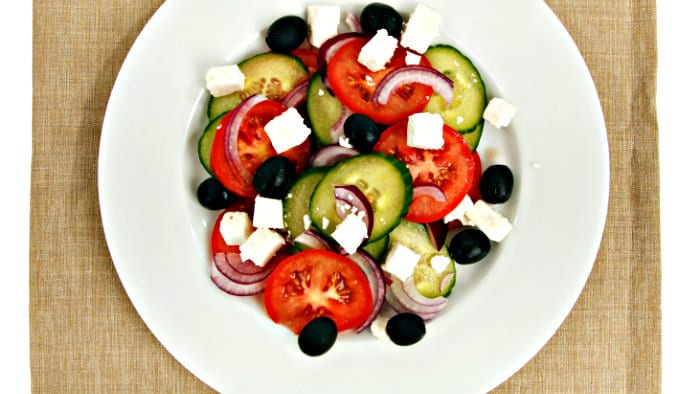 Greek salad is another traditional and healthy dish. We like to make such a salad at home. The combination of tomatoes, onions, cucumbers, olives and feta cheese with vinaigrette dressing is a go-to lunch in our house. 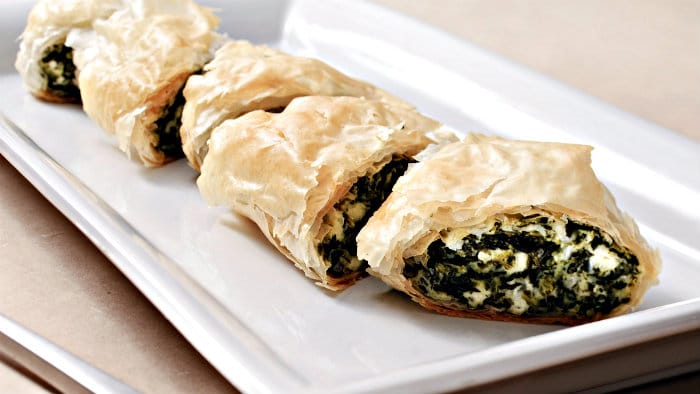 Spanakopita is a spinach pie. Greeks love their filo dough and use it for making many pies and desserts. Inside the flaky filo pastry is a delicious green mass consisting of spinach, which gives it a green color, onions, garlic, ricotta cheese, feta, olive oil, spices. 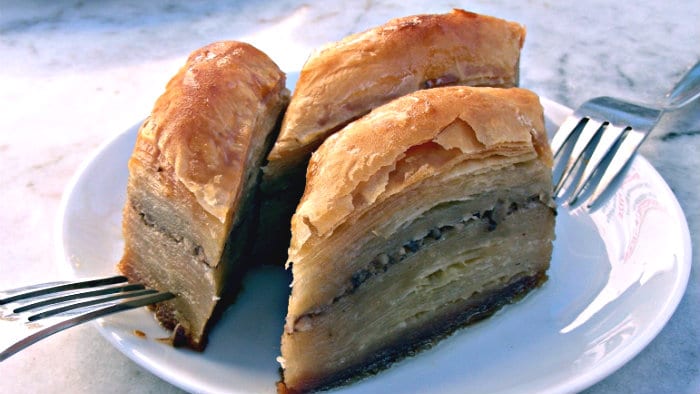 Greeks love their sweets to be very sweet. One of such desserts is baklava. This signature Greek treat is made with phyllo dough, grounded nuts, butter, and sugar. After it is baked to golden color, the flaky crust is sprinkled with honey. Definitely a winner! 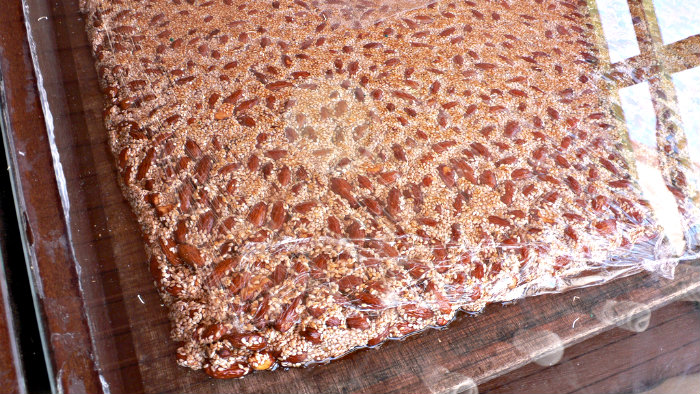 Also, we enjoyed pasteli sweet bars made with honey and either sesame seeds or such nuts as almonds, pistachios, walnuts. It was difficult to decide which kind of pasteli we liked the most. 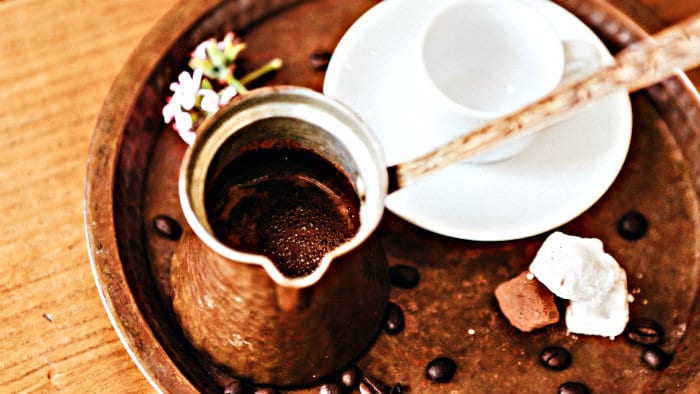 At one of the rants, we watched how greek coffee was made. The traditional long-handled copper coffee pots were standing in the large pan filled with the hot sand. Such coffee pots are wide-spread in Russia, Armenia, Turkey, and some other countries. Actually, these pots are called “turka” in Russian, which is close to Turkish. Needless to say, Greek coffee was very strong and aromatic. Being so strong, it needed a lot of sugar or a Greek dessert.

Book your flight to Greece

Greece is a hot country. If you do not tolerate heat very well, go in September or October, but better in the spring (March or April) when everything is green, and many ruins are covered by a carpet of spring flowers.   These shoulder periods are also less expensive than summer when the whole northern Europe is traveling south for fun in the sun.