What to eat in Ecuador

“Ecuador is a compact country with lots jammed in. For nature lovers, you can do everything from chilling on island beaches to climbing snow-capped mountains.” – Survive Travel 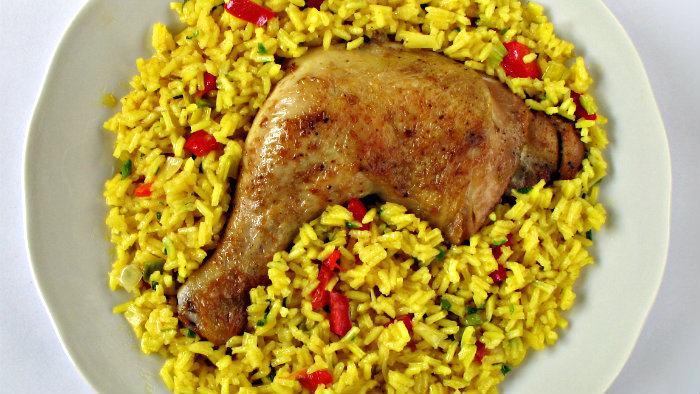 Arroz con Pollo (rice with chicken) is a well-known dish not only in Ecuador but all-over Latin America. 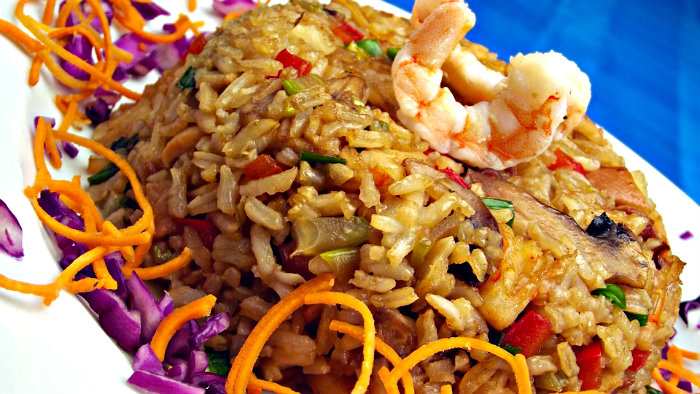 Another variation is con (rice with shrimp). We had these dishes in Costa Rica, Chile, Argentina, Peru, Uruguay, Paraguay, and other countries on that continent. 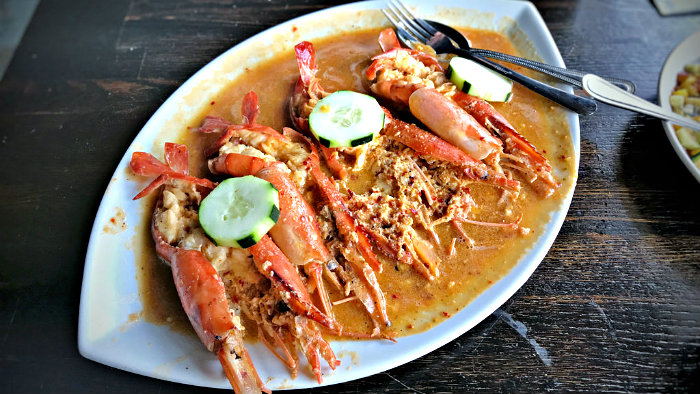 Langostinos (squat lobsters) in garlic butter sauce was our favorite meal in Cuenca. It reminded us of shrimp scampi, but Ecuadorians do not add white wine to this dish as the Italians do. 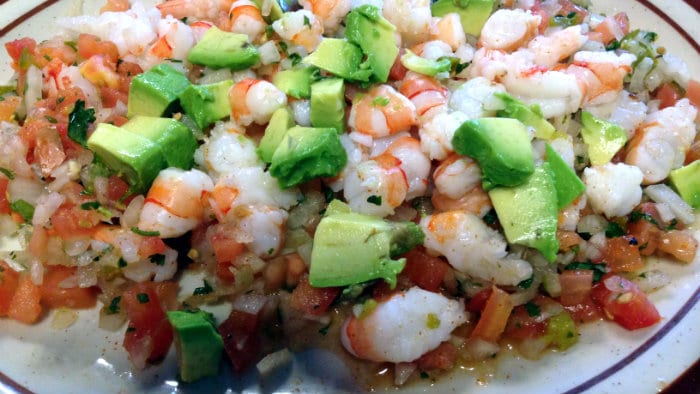 Our first introduction to Ecuadorian ceviche was in Florida. The family of my students brought this fantastic dish to our house. The uniqueness of the Ecuadorian recipe is that the seafood is cooked first, and then marinated in lime juice.

In all other countries, people marinade raw seafood in lime juice and serve it as is without any cooking. We liked the Ecuadorian ceviche much more because we did not have to worry about getting sick from raw seafood. 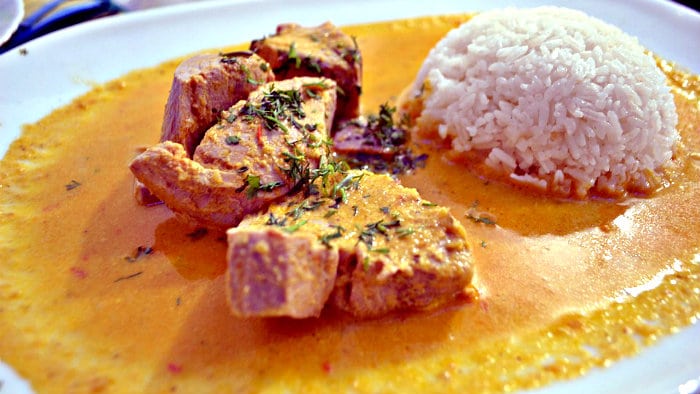 The other seafood we loved was . Fish is marinated in lime juice, garlic, cumin, coriander and cooked in coconut milk with green peppers, onions, tomatoes. It is served with rice (which absorbs the wonderful sauce), and . Patacones are fried green plantains which accompany almost any dish in Ecuador and the rest of Latin America. 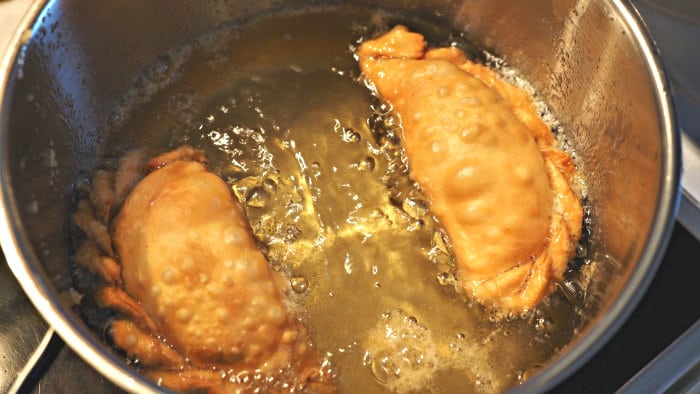 Empanadas are made all over Latin America. They are small pockets of dough which are filled with meat and/or vegetables like carrots, peas, potatoes. In Ecuador, they deep fry empanadas, rather than bake them. We try not to eat greasy food and had just one empanada during the whole trip. It was delicious, but we would prefer if it were baked not fried. 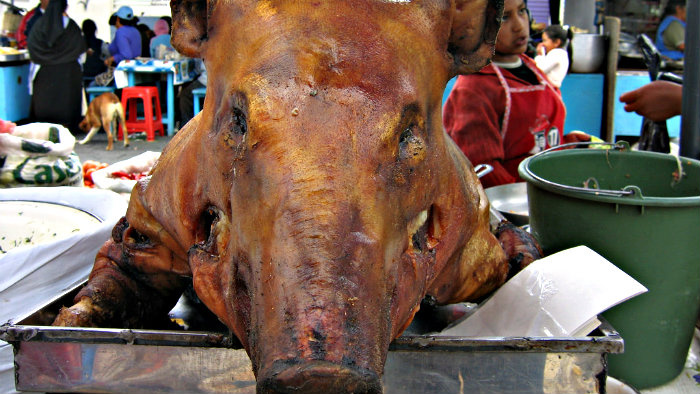 In our hotel on the Napo river, we were served three buffets per day because we were in the middle of nowhere. The hotel was on a high bank of the fast-moving river.  Behind the hotel was the jungle.

One of the dinners was especially memorable. The hotel staff prepared – a whole slow-roasted pig. It was cooked with garlic and spices. The meat was very tender. 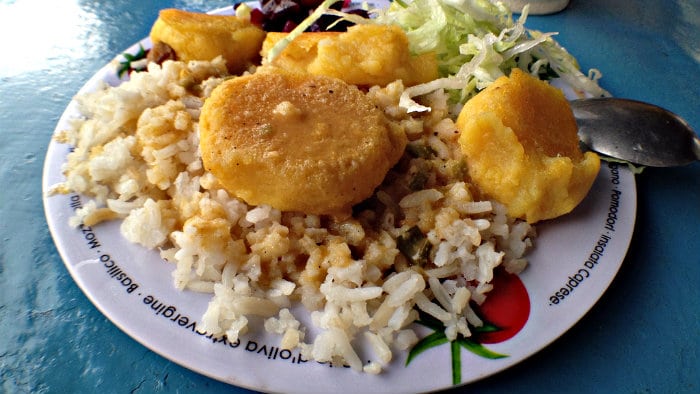 As in Peru, the Ecuadorians eat a lot of potatoes. One of the typical Ecuadorian dishes we loved was , crispy potato patties. They are made of mashed potatoes with onions and stuffed with cheese. Very often, are served as a side dish.

Many restaurants in Cusco and Quito offered lunch special:  a combination of chicken, chorizo, fried egg, salad, and . We were surprised to see three different kinds of protein (chicken, chorizo, egg) on the same plate. 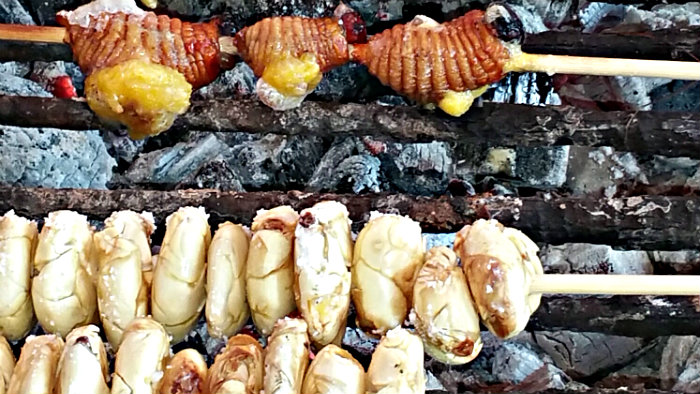 At one of the markets in the Amazon River area, we watched local people eating something bizarre. It was a large beetle larva called which is a traditional food in that area. To show how delicious it was, our bus driver ate a whole live creature (one inch long and still wriggling). No one agreed to follow his example. We decided to try it grilled. It tasted like seafood, and all of us liked it. 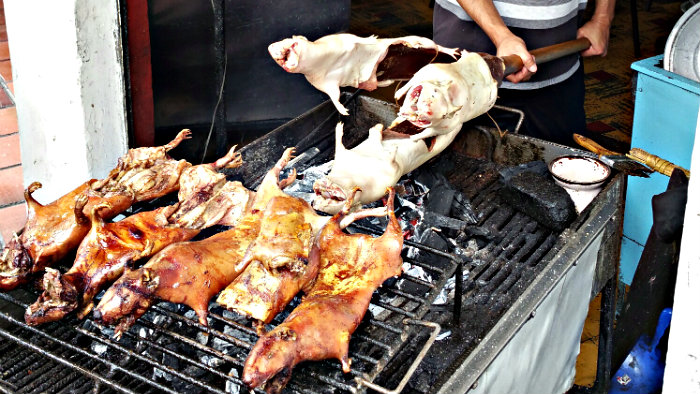 How about grilled , better known as a guinea pig? They grill it whole. Hopefully, you will not be turned off by its’ pathetic little teeth sticking out of its’ open mouth. We did not eat when we traveled around Peru. When we came to Ecuador, I promised myself that we will not be squeamish and will try this traditional food of the Andes region.

In Banos, our group stopped in front of the restaurant which specialized in grilled . The guide suggested that we all should go inside and order this popular Ecuadorian delicacy. However, none of us was brave enough to do it. Exasperated, our guide bought a piece of and asked the cook to cut it in many little pieces.

Standing in front of the restaurant, looking into the closed eyes of the being grilled in front of us and observing its tiny sharp teeth sticking out, we hesitantly put small pieces of the guinea pig meat in our mouths.

In developed countries, people think of guinea pigs as small cute pets. My best friend has two photographs of herself with her baby guinea pig, called Masha. One picture shows my friend wearing a beautiful white sweater with Masha sitting on the shoulder. On the second picture, taken a couple minutes later, the sweater has a large red stain in the front.

This accident wouldn’t happen if Masha didn’t eat a healthy portion of red beets an hour before. The white sweater was ruined forever, but the before and after photographs are still in the family album. 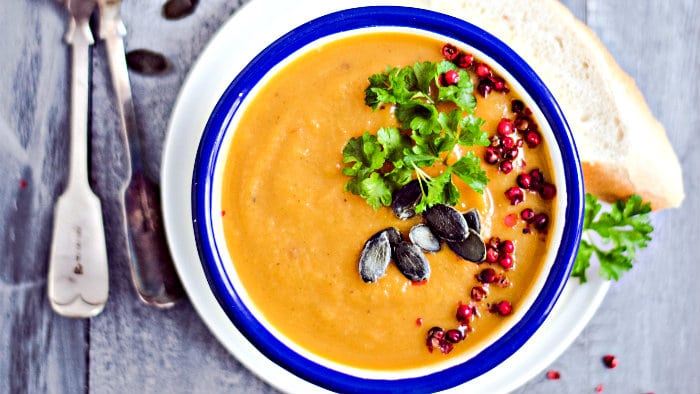 If you like soups, Ecuador has many varieties of them. We came to this country just before Easter, and we were especially impressed by the traditional soup they make during Easter time. It is called . This meal in a bowl has 12 (!) kinds of beans to symbolize the twelve apostles.

One of these days, I would like to make it, but I am overwhelmed by the number of ingredients. Fonseca is heaven to eat, but hell to prepare, so I haven’t even tried to make it at home.

Locro soup, on the other hand, is not difficult to prepare. It is a potato soup made with onions, garlic, cumin, achiote powder, and some other spices. Before serving, is topped with grated cheese and avocado slices.

The first time we ate it, was after a long bus ride through the mountains. The day was cold, with a light drizzle. Our group was tired and hungry. We stopped at the mountain resort which had a brook running through the whole property, even the reception area. The small pond in the lobby was filled with trout. After we finished , they served fried (trout) with French fries. 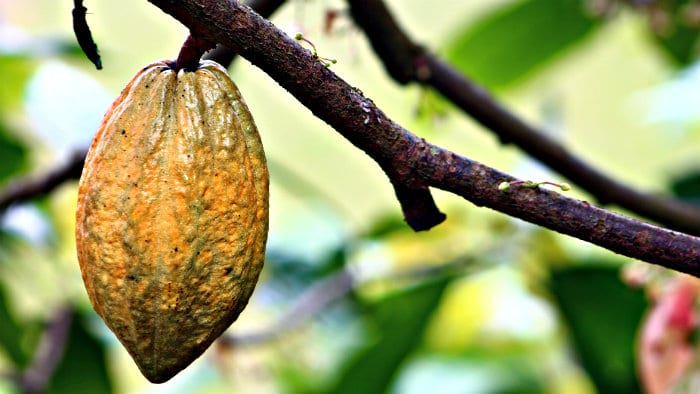 Ecuador is famous for its’ coffee and chocolate. Try to visit one of the cacao plantations. You will see the cacao trees up close. The fruits are growing right from the trunk. Watch the process of cleaning and drying cacao beans, try a piece of chocolate or drink freshly-made hot chocolate. 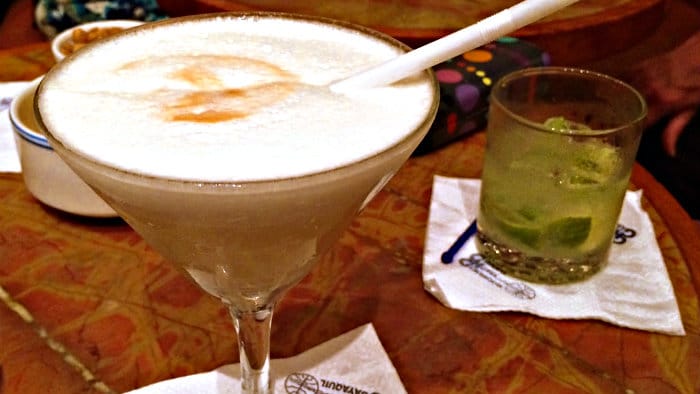 Before the meal, the hotels treated us to Pisco sour – a traditional alcoholic cocktail made with Pisco brandy, lemon or lime juice, sugar syrup, egg white. We already had Pisco sour in Peru and in Chile.

Book your flight to Ecuador

Best time to travel to Ecuador from December to January and from April to May.