We had more memorable moments staying at hostels than when we stayed in 4 or 5-star hotels. Of course, centrally located costly hotels have many amenities: room service, doorman, fully staffed reception. But if you are on a budget, hostels are a great place to save money on lodging. The money you save allows you to afford more extended vacations.

Here are the reasons why choosing hostels over hotels can make your trips abroad less expensive and more satisfying.

Advantages of staying in hostels

You meet other travelers. Hostels have communal kitchens and lounge areas. There, you have a chance to socialize with other people and get information about the places they already visited or plan to see. Single people can even find a companion to go sightseeing together.

You save money on food. You can save a lot of money using the communal kitchen. By purchasing food at the local supermarket or a farmers market, you can prepare healthy and inexpensive meals.

You get advice about cheap places where locals eat. When you ask a concierge at the expensive hotel about local restaurants, you get a couple of names, and when you go there, the food is costly. The hostel workers know all the good and cheap places close by.

Lack of privacy if you stay in a dorm. If you choose to sleep not in the private room but in the dorm, you share space with three, four, or even more strangers. The bathrooms and showers will be in the hall. It will not be as quiet as in the hotels – people are coming and going.

No maids. If you stay in a hostel for several days, you have to make your bed yourself.

Safety of your documents and valuables. The hostels do not have a room safe as the hotels do. You can use the locker in a dorm room, but it is better to bring your own padlock, just in case. Keep the money and passport in the money belt, even at night. Some people use small locks to secure their backpacks for the night. Do not keep your phone in the open. Place it in your pocket, bag, or locker.

Tips on staying in hostels 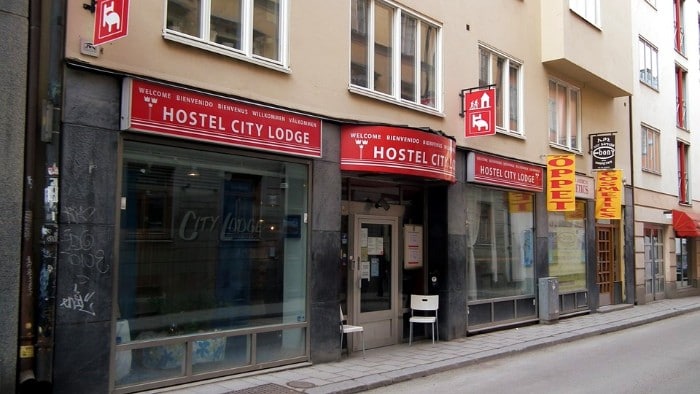 Hostel in Sweden
(our first experience with hostels abroad) 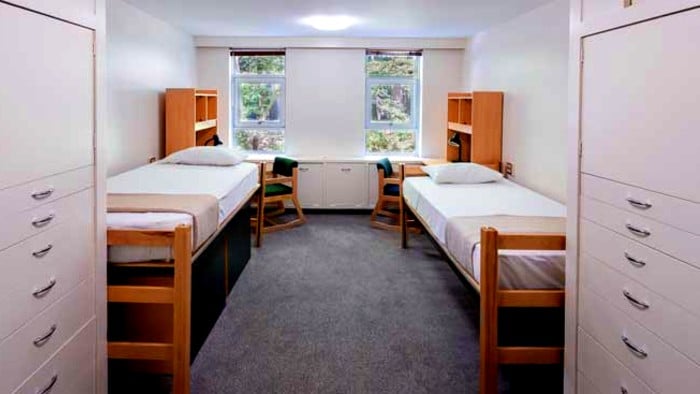 Our first experience with the hostels was a complete surprise. We were in Sweden, driving to Gothenburg. It was early evening. We wanted to find a hotel before getting to the large city. We passed several signs for youth hostels (an elm tree and a small house) but decided not to go there, because we were not “youths” anymore.

Not seeing hotels along the road, and getting more and more tired, one of us suggested to stop at one of those youth hostels and ask if they would allow us to spend a night there. The worst they could say was “no.”

We exited the highway and after a short drive through the woods, came to a clearing. The sprawling building looked like a clubhouse of the expensive country club. It stood in the middle of the grassy lawn and was surrounded on all sides by forest.

It didn’t look like a youth hostel at all, and we almost turned back. However, the sign in front had the same youth hostel symbol, and the name of the building was followed by the words “Youth Hostel.”

Cautiously, we approached the front desk. “Do you have two beds for the night?” “Would you like a private room?” asked the girl at the front desk. After hearing the price for the room, we paid immediately.

The room had two twin beds and the large window overlooking the lawn and the trees behind it. The bathroom was in the hall just a few steps from our door.

Despite the impression of a posh country club, there were no golf carts or golf course. A  few rabbits were hopping in the grass. The property was large, and it took us at least an hour to walk along its perimeter.

We returned to the building when it started getting dark. It was time for dinner.

The communal kitchen had everything – fridge, stove, pots, pans, utensils. The kitchen was empty, and we enjoyed a quiet dinner sitting at the large wooden table. We couldn’t believe our luck.

Soon, other people started coming to the kitchen to make dinner. There were families with kids and a few mature couples. We did not see any “youths.”

All hostel guests went to their rooms at a reasonable time. There was no partying at night. After a restful night, we made breakfast using the communal kitchen again, and hit the road. 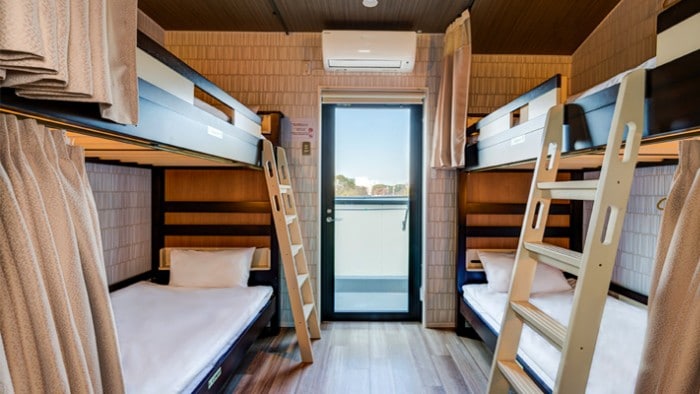 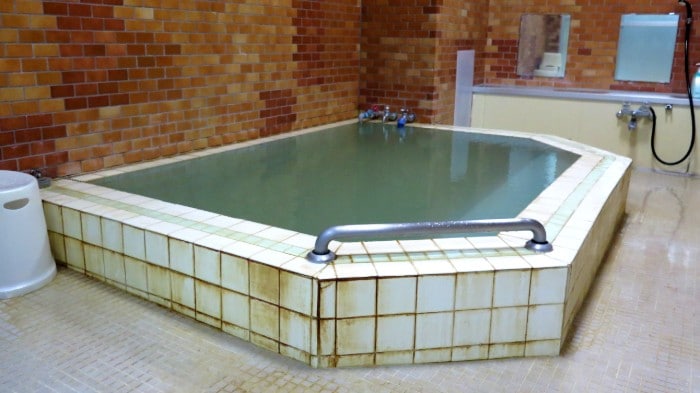 In Hiroshima, Japan, we had another memorable stay at a youth hostel. There, we did not see anyone older than 25 or 30. It was strange to be the only people of “certain age.”

Like in most hotels in Japan, this hostel had onsen – Japanese bath. It was more spartan than the onsens in hotels, but it had everything we needed – the tub with hot water and a pool with pleasantly cool water.

After a long soak, completely relaxed, we had our favorite meal in the communal kitchen – gyoza (dumplings) which we bought at the local 7/11 and reheated in the microwave.

Now it was time for bed. Unfortunately, this hostel did not have private rooms, just dorms. They had two wings – one for men, another for women. Each one of us was placed in a four bunk bedroom.

Luckily (or so I thought), I was alone in my room. After reading for a few minutes, I was ready to fall asleep. Suddenly, just after 10:00 pm, three Chinese girls entered the room. They were talking and laughing loudly, but as soon as they saw that someone was already in bed, they became quiet, and in a few minutes went to sleep.

I started counting my blessings for having such considerate roommates, but it was a little premature. One of the girls was an extremely loud snorer. How do you stop a stranger from snoring? You can not poke her with your elbow and tell her to turn on the other side.

In the morning, Alexander and I met in the kitchen and exchanged our stories. His night was not much better than mine. His three roommates (Japanese guys from Tokyo) were also friendly, polite, and considerate. But two of them (!!!) snored throughout the night, sometimes taking turns and sometimes snoring in a duet.

In the morning, we purchased a delicious Japanese breakfast from the stuff (miso soup, fried fish, dried seaweed (you don’t like it? Well, we do), and things started looking bright again. 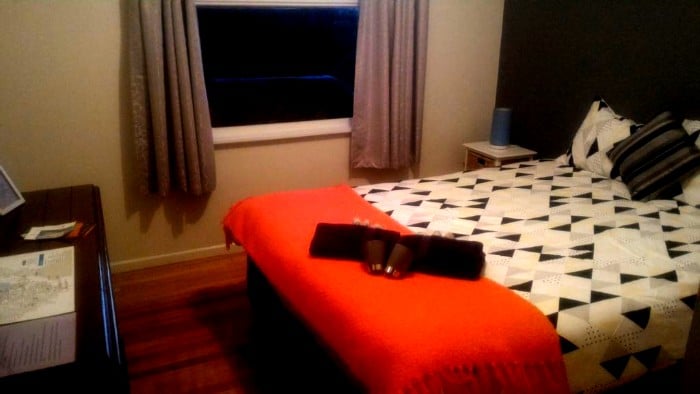 Our most recent hostel experience was in Barcelona, Spain. We needed only one night stay before checking into a four-star hotel for two nights and then going on a ten-night cruise to the Canary Islands.

Knowing that we will be pampered for twelve days, we decided to spend as little as possible on this one night. We also wanted to stay as close to the fancy hotel we already paid for so that it wouldn‘t be too difficult to take our carry-ons from one place to the other.

We found a hostel precisely two blocks away, on Rambla de Catalunia. It was just a five-minute walk from the metro station. They had only one private room with a king-size bed. The rest of the facilities were dorms with bunk beds that slept 2 to 4 people.

Everything was spotless. The staff (two men and one woman) was friendly and helpful. There were lots of brochures with information about the sights to see and places to eat. On the blackboard was a schedule of walking tours of the neighborhood which included a bar crawl.

The kitchen had all the appliances we needed – fridge, toaster, coffee maker, dishes, utensils.

One big “but” – our room was facing a bustling street with multiple outdoor restaurants and bars, where people were eating, drinking, laughing through the whole night. The noise from cars, motorcycles, and party-goers was constant. Even the earplugs didn’t help.

It was our fifth visit to Spain and we already knew that the Spaniards go to the restaurants very late. Looking for the cheap place to stay in this expensive city, we didn’t check the location well enough.

Needless to say, the next morning, when we checked in at the expensive hotel, we asked for a quiet room. 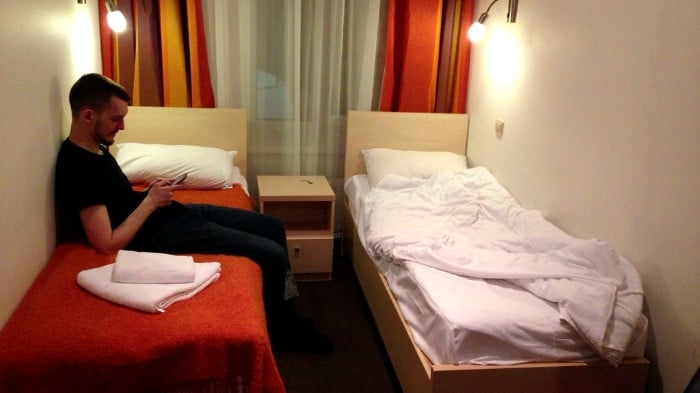 We came to Russia in January and spent more than a month in Moscow. There was still time before flying to Miami, and we decided to take a train to St. Petersburg. Though Alexander was born in this city, he did not visit it for a long time. There was another compelling reason to visit St. Petersburg – it is one of the most beautiful cities in the world,  famous for its architecture, museums, and theaters.

Getting off the train, we immediately went to look for a hostel. A cell phone showed us many hostels located near the city center. Prices for accommodation were quite low – from $9 and up.

We were surprised to see that even the main streets of St. Petersburg were not cleared of ice and snow as it was done daily in Moscow. Holding hands and trying not to slip on the ice patches, while cautiously glancing at the huge icicles hanging from the roofs, we looked into several hostels. In one, nobody opened the door. Another hostel did not have a vacant private room. Some places seemed a little expensive ($ 30-40 per day). In other hostels, everything looked great, but the rooms faced a noisy street.

We decided to continue our search on the quiet side streets. And soon we found what we liked. This hostel had five rooms, two of them private, others with bunk beds.

We chose a quiet private room with a window overlooking the courtyard, which was completely covered with a thick layer of snow. The room had two twin beds with sheets and two towels per person. The room was clean and cozy, with a stable WIFI reception. The cost? Just $11 per night.

The living room had a large table and wall-mounted flat-screen TV. The spacious kitchen had well-stacked shelves. Guests could use coffee, tea, various spices, and dry snacks.

In the kitchen, a woman was busy frying potatoes and making a salad. She said that she was preparing dinner for her husband, who had to return from work any minute. This family, it turned out, had been living in the hostel for several months. They came from the provincial town, where her husband earned very little. He found a high-paying job in St. Petersburg. We did not ask how much they paid for accommodation, but, no doubt, they got a considerable discount.

After this first pleasant experience with a Russian hostel, we decided that during future visits to Russia, we will no longer burden our friends and relatives and will not stay at expensive hotels or private apartments. We will use only hostels.

After several stays in hostels in different countries, we came to the conclusion that if we want to save money and have a memorable experience, choosing hostels over hotels makes a lot of sense.