We camped in many states of the USA, Canada, and Scandinavia. We slept at campgrounds in tents, in a converted van, and in a pop-up.

Camping helps you relieve stress. In nature, without city distractions, you can spend quality time with your family. You breathe fresh, clean air. Near many camps, you can find great hiking trails. Staying at the campgrounds, you can see and hear birds, get a glimpse of wild animals – deer, rabbits, foxes. Even cooking food on the open campfire is a relaxing and enjoyable activity.

Of course, like everything else, camping has its minuses too. You might be bothered by mosquitoes, soaked by the rain in the middle of the night, scared by a bear, moose, snake, or even a bison. If you sleep in a tent and have noisy neighbors parting till the wee hours, you will not be able to sleep. On the other hand, you can have noisy neighbors in the next room of the fancy hotel and spend a sleepless night. It happened to us several times.

* Night shooting at the campground in New York state,
* Sleeping on permafrost in Alaska,
* Struggling with windstorm in Canada,
* Scary night at the deserted campground in Michigan.

They shoot at campgrounds, don’t they?
(Catskill Mountains, New York) 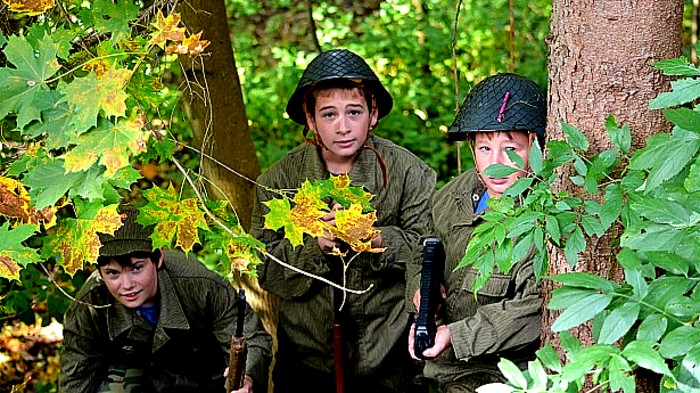 Catskill Mountains is a popular vacation area for the residents of NY. The proximity of these mountains helps stressed-out New-Yorkers escape the daily grind and the noise of the large city.

One summer, camping in the North-East, we stopped at the large campground in the heart of Catskills. During those hot sunny days, the mature trees provided much-needed shade for the site we chose. There were just a few campers around us.

When we stayed at the very busy campgrounds, it was impossible to sleep till after midnight because of people talking and laughing. This camp seemed to be just what we were looking for: a beautiful forest, shade, peace, and quiet. Little did we know.

As we were drifting to sleep, the peaceful night was disrupted by the sounds of shooting. Shooting?! We listened carefully. Definitely, those were the sounds of gunfire.

We ran out of the tent, got in the car, and drove to the manager’s office next to the campground entrance. It took a lot of knocking to awake the manager. “What’s happening at this campground?” we asked. “Why do we hear the sounds of shooting?”

The manager did not look surprised. “Well, sometimes kids from New York City come to our campground to play the war games,” he explained. “With real guns?” I asked astounded. “I am not sure. Let’s hope not,” said the manager, unperturbed.

We demanded that he called the police. Instead, he went to talk to the “kids,” and in a few minutes, the shooting stopped. Of course, we did not stay for the second night at this campground. 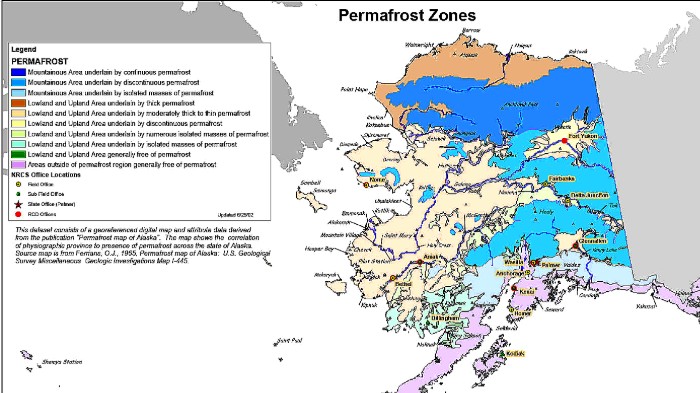 Our first trip to Alaska combined a one-week cruise and a two-week car trip. During the short tourist season in this state, all hotels, motels, and Bed & Breakfasts charge the top price. To save money, we decided to camp. Also, camping would allow us to stay at the national and state parks.

We took this journey in the middle of July but, just in case, packed warm clothes. Besides the tent, our large suitcase had thick mats (manufacture claimed that they protect from the cold ground) and thermal sleeping bags (made to withstand low temperatures).

After the cruise, we rented a car in Anchorage and started our dry-land journey. The first stop was at the Denali National Park campground.

The day was pleasantly warm. It got a little cooler in the evening, but we were sure that we’ll be comfortable throughout the whole night. Before diving into the tent, we enjoyed observing a multitude of stars in the clear sky – a rare sight for the city dwellers. With warm clothes on, we were toasty in our sleeping bags, and the thick mats helped us not feel the hard ground underneath.

Note. The ground in Alaska remains frozen for thousands of years, and short summers are not able to warm the earth deep enough.

The next day, we went to the tourist store and bought a blanket. However, even with this blanket underneath, the frigid ground made our second night as miserable as the first one.

Before the third night, we scavenged for the discarded cardboard boxes in the dumpsters of the nearby stores. We were not picky: we grabbed even the cardboard that had some stains. Who knows why our third night was a success. Thanks to a few layers of cardboard, or because of two previous sleepless nights?

However, after leaving Denali, I announced to Alexander that for the remainder of the trip, we will “splurge” on motels and Bed & Breakfasts. The Alaskan chill coming from the ground made our trip more expensive than we planned. Oh, well, we still had a great time in Alaska. 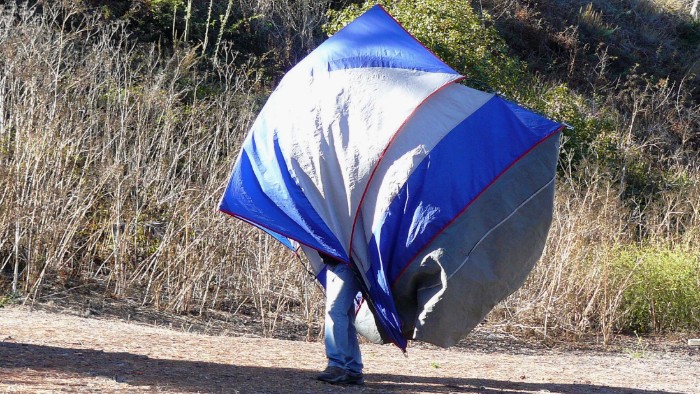 The north part of the Glacier National Park is located in Canada. The Canadian portion is called Waterton Lakes National Park. We spent one night at the campground there. Most of the campsites were occupied by various recreation vehicles. There were just a few tents. We pitched our tent in the spot with a splendid lake view. After a long hike, it was great to prepare dinner on the camp stove, eat it while enjoying the stunning view, and then get inside our small cozy tent.

Exhausted, we fell asleep as soon as our heads hit the pillows. Sometime after midnight, the strong wind from the lake started rocking our flimsy tent from side to side.

The wind was powerful and it felt that our tent will be picked up off the ground together with the two of us.  To keep the tent from flying, each one of us sat up against a wall to keep it from that crazy rocking.

The wind lasted for several hours, but to us, it seemed forever. Only at dawn, the wind died down, and we climbed back in our sleeping bags and slept till noon, despite the noises from other campers around us.

After the hurried breakfast, we packed the tent and moved to a motel located inside the park. Small, dark, and expensive, the room seemed like heaven after that awful night in the tent. 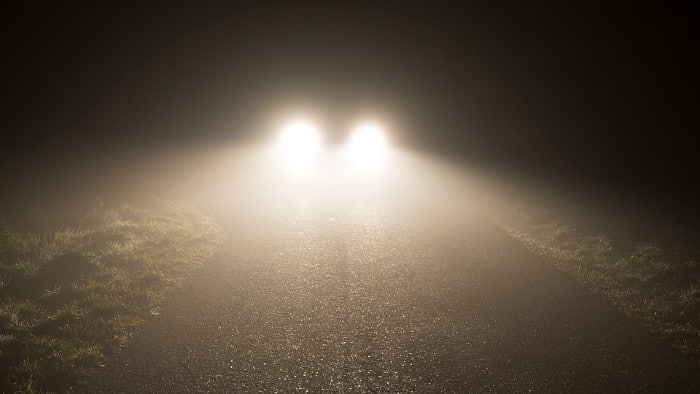 Traveling in Michigan, we preferred to stay at the campgrounds located on the lakes. It was easy to find such camping areas because this Northern state has more than 11,000 inland lakes, 5 acres in size or larger. One Saturday afternoon, we came to a campground on Mack Lake. It was filled with all kinds of recreation vehicles and tents.

We drove around and found the only vacant spot far from the lake. The next day, on Sunday, lots of people would go home, and we will be able to get a better spot for our tent.

This gorgeous camp was popular with people who love to ride ATVs (all-terrain vehicles). The information on the notice board included lots of rules and directions for ATV users. It was an especially noisy place because ATVs were zooming through the campground in all directions.

Seeing so many people around us, we already knew that we will not get a good night’s sleep. With campfires burning, music playing, people talking and laughing, kids running around and screaming, dogs barking, there was no hope for a quiet night. We could fall asleep only after midnight.

In the morning, we went on a long hike and returned to our tent in the late afternoon. The campground was going through the mass “exodus.” Vehicles were leaving one by one. We moved our tent to the site right in front of the water. What a great view it was! We prepared a nice dinner and ate it at the table, facing the lake. Later in the evening, the ranger drove by and waved to us.

By seven in the evening, the camp looked completely deserted. Bizarre! Such a beautiful lake and no people! Feeling a little lonely, we comforted ourselves by saying that at least the night will be tranquil, and we will sleep much better than during the previous noisy night.

After the sunset, it became clear that nobody else will be staying at this campground – just two of us. It felt a little eerie to me. When it became dark, and we were ready to get inside the tent, a black van cruised slowly by our site. It didn’t stop but drove by at snaillike speed as if people in the vehicle were checking on us.

I brought a blanket and pillow from the tent to our small rental car. The back of my seat could tilt back just a few inches because of boxes and bags behind me. It was impossible to stretch legs.

Before I closed my eyes, the same black van drove slowly by. Several scary scenarios ran through my head. I realized that I will have to keep the vigil for the whole night. I wouldn’t be able to call the police from my cell phone – there was no reception in that area. Should I drive to the campground entrance, and find an emergency phone?

After midnight, the temperature dropped drastically. I was freezing. In the back seat, I found several road maps. I covered myself with them. Maps helped me to stay warmer, but they kept sliding to the floor.

I tried to watch the movie on our I-pad, but after a few minutes, the battery lost all juice. My body was shaking from cold and fear. From time to time, I cracked open the car window to listen to the sounds outside.

After 3:00 am, it dawned on me that the black van did not drive by for a long time.  I felt a little bit better, but still not well enough to leave the “safety” of the car and move to a tent.

Eventually, when the sky above the lake started turning from black to gray, I drifted into a fitful sleep. I was awakened by a knock on the car door. Terrified, I jumped up, hit my head on the ceiling, and dropped all maps on the floor.

Alexander was standing next to the car, sun shining behind him. He looked well-rested. “Time to rise and shine,” he said, yawning and stretching. “Did you sleep well? Was this little car comfortable for you?”

Before leaving the campsite, still shaken from the fretful night, I informed Alexander that it was the last time in my life that I  slept in a tent.

Besides these worst camping experiences, we had a few other unpleasant situations at the campgrounds. Once, during a violent storm, our tent was flooded in the middle of the night. Another time, a herd of bison walked through the campground and all campers had to get out of the beasts way.

However, if you compare all those annoying episodes with the thousands of great nights we had in our camping “career,” you will understand why we think that camping is an excellent way to vacation