Go ahead – embarrass your teen!

Go ahead – embarrass your teen!

Our 14-year-old daughter wanted to join her classmates to go to Cancun for the spring break. Her reason was that during that trip, she would turn 15 and will be old enough to travel without her parents.

We told her that it would be out of the question. A bunch of 16 and 17-year-olds going on their own to Mexico to do what? Drink, do drugs, have sex?

Yes, we saw with our own eyes how students behaved in one of the Сancun resorts during spring break. The bar, located right in the pool, was surrounded by the boisterous crowd of young boys and girls. The three bartenders were overwhelmed, filling multiple plastic cups with beer. None of them was checking if the hands holding the cups belonged to the underage kids (the minimum legal drinking age in Mexico is 18 years old).

The pool was teeming with boys and girls like a pond full of fish. Many were drunk. We did not see any of these kids leaving the pool to go to the bathroom. Where did all this beer end up? More likely, in the water. Of course, we didn’t dare to swim in that pool.

Instead of the trip to Cancun, we allowed our daughter to sign up for a trip to France and Italy organized by her 10-grade French teacher. The only caveat – her mother (me) will join the group.

Being an avid traveler, I was eager to visit France and Italy again. Besides, I did not want to miss a chance to travel on the cheap. Also, I didn’t think that one adult would be enough to supervise 15 teens.

Our group consisted of 13 girls and one boy, all ages 16 and 17, our 14-year-old daughter (who would turn 15 during the trip), a French teacher, and myself. I was concerned that even with the two adults, it would be a challenge to take care of these smart, energetic, but mostly spoiled teenagers! (Almost all of them drove expensive cars and wore designer clothes.)

Our daughter was embarrassed being the only one in the group who had her mommy joining the trip. Little did she know. Her embarrassing moments were just beginning.

In South Florida, where we lived at that time, the temperature at the end of March is in the low 60 to high 70 degrees. There is no humidity yet (wait for summer!). It is a paradise.

As a family, we already traveled to Europe. But because of the school schedule, all our trips were during the summer months. Somehow, it skipped my mind that in other parts of the world, the springtime weather might be very different from Florida. All that I packed for the trip to France and Italy was a pair of shorts, old stretch pants for the plane, a few T-shirts, and one light sweater. Our girl selected her outfits much better. She packed for all kinds of weather. 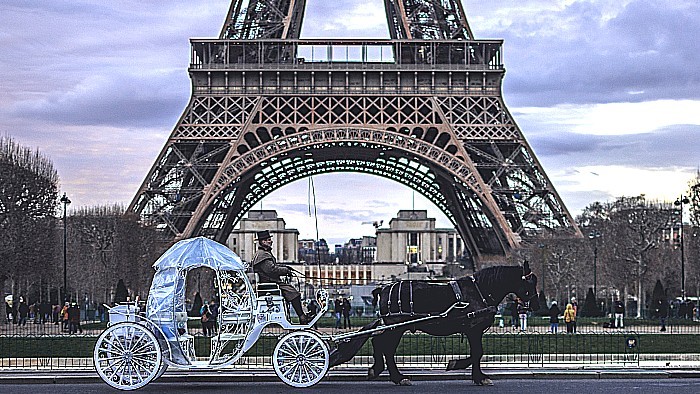 As soon as we arrived in Paris, I realized that I made a big mistake. My shorts were useless at 40 degrees temperature. For the first two days, I ended up wearing my old pants, which were stretched around the knees and did not look good on me at all. For two long days, our daughter suffered the humiliation of seeing her mother sporting these pants in front of all her friends.

On the third day, when our group had some free time, I managed to get to a store and bought a pair of jeans. Wearing the same purple sweater every day did not look good either. What to do? To buy a new one? But I had plenty of sweaters at home which I almost never wore. My everyday clothes were shorts and T-shirts.

The only practical (for me), but annoying (for my girl) solution was to start borrowing shirts and sweaters from my daughter. Very reluctantly, she had to share her clothes with me.

None of the kids or the French teacher made any comments when one day, my daughter would wear a blue sweater, and the next day, her mom had on the same one. But I am sure she suffered in silence. 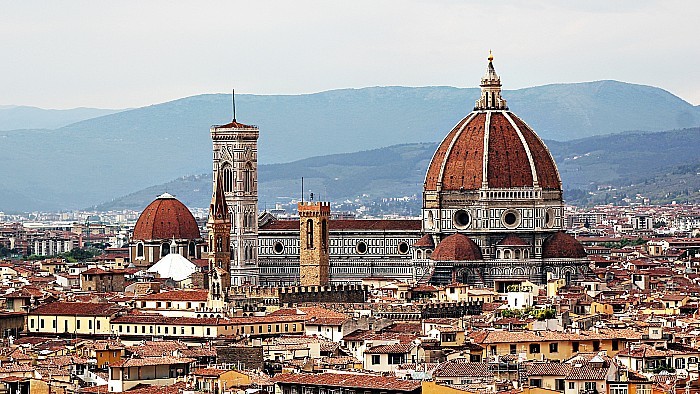 The beautiful city of Florence, Italy, greeted us with a cold drizzle that lasted for the whole day. The bus dropped off our group about a mile from the center of the old city. All that I wore on that cold day were my new jeans, T-shirt, and the purple sweater. Instantly, the cold wind from the Arno River chilled me to the bones.

I came up with an unusual but practical solution. I stuffed crumpled newspapers under my sweater, put a supermarket plastic bag over them, and stuck all these layers between the T-shirt and sweater. Immediately I felt much warmer.

Several kids and the teacher congratulated me on this brilliant idea. My daughter, however, tried to walk as far from me as possible. Her only comment was that I looked like a bumpy sack of potatoes because my crumpled newspapers and plastic bags kept moving around as I walked.

During our whole-day city tour, we visited several museums, churches, walked on famous streets. Despite my uncomfortable clothing and wet feet, I enjoyed my first visit to Florence, the incredibly exciting city!

At one of the hotels, we met a group of teenagers from Iowa. “What’s in Iowa?” – our teens asked. “Cornfields,” – was the laconic answer. The high schoolers from Iowa were the same age as our kids. The young Iowans said that they were happy to be in Italy, where the drinking age limit was 16. They tried to consume wine as often as possible, which made them feel like grown-ups.

Inspired, one of our girls offered to buy wine for the whole group. Flabbergasted, I loudly announced that there will be no drinking while we are traveling together. Our mortified daughter knew that they all were too young to drink, but why it should be HER mother who set up all the rules and limits on their almost “independent” trip. 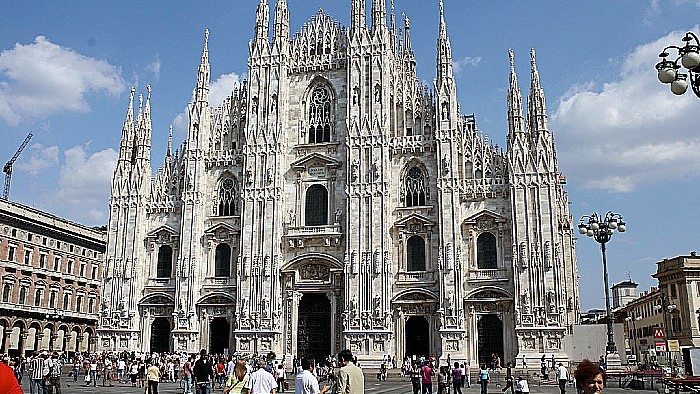 After a long day of touring Milan, we checked into a nice hotel which was located quite far from the city center. The remote location made sense: the trip was cheap, and the group was placed in decent but inexpensive accommodations.

At 10:00 pm, I was getting ready to say good night to the teacher with whom I was chatting in the lobby. Before I left for my private room to get a well-deserved rest, all our kids came to the lobby. In very excited voices, they told us that they were going out with a group of Italian boys whom they met earlier on that day. The Italian guys came to the hotel on the motorcycles and invited our kids on an exciting ride through the city.

The French teacher was stunned. She did not know what to say to our naive kids who were not asking permission; they were “informing” us of something they decided to do.  The whole group was in a hurry to go back to their rooms to get ready for the “night out.” Luckily for my daughter and the rest of the group, there was another adult on this trip – me!

Completely ignoring the timid teacher, I told our teenagers that going out with local boys on motorcycles is completely out of the question. Now it was kids’ turn to be stunned! They were so sure that they had complete freedom on this trip.

Everyone started complaining that they had absolutely nothing to do at the hotel and the Italian boys are very nice and friendly. Every argument was met with my firm, “no.”

In a few minutes, the French teacher recovered from her initial shock and got her voice and her senses back. It finally dawned on her that she would be responsible if anything will happen to the kids. With a lot of authority in her voice, she prohibited this “outing,” and the disappointed teenagers had to spend a boring evening in the hotel. I am sure that this event embarrassed my daughter even more than the sharing-clothes business.

I should have told you, my dear daughter, that I was sorry for embarrassing you on that school trip. But honestly, I was not sorry at all. Now, when you are grown up and have young children, you try to protect them from bad mistakes the same way I was protecting you during that spring-break vacation. And as to my mistakes with the clothing – unfortunately, I still make them.